I’d like to introduce to you a new Nautie segment called, “STYLE Fashion & Hair EVOLUTIONS.” During these segments you will be introduced to different celebrities who have gone through amazing style journeys. You will get to see how their fashion and hair have evolved over the years. Sit back, relax, and prepare to take a walk through our first Nautie girl’s style journey.

Our first candidate is Angela Simmons, entrepreneur, fashion enthusiast, and daughter of Run DMC! We’ve watched Angela grow up on her family television series, Run’s House, where we learned about her love for fashion. Coming from a line a designers, such as her aunt Kimora Lee Simmons, creator of Baby Phat, and uncle Russell Simmons, designer of Phat Farm, fashion is set to be in her blood. Being innovative and fashion forward has always come natural to Angela Simmons. As a former-student of the Fashion Institute of Technology, she has been a role model for young girls, both academically and fashionably. With her and her sister, Vanessa Simmons, Pastry’s shoe line, she gives young girls and women a chance to get in touch with their personal style.

Though some may be confused by Angela’s fashion forward style, she remains confident in anything she wears. Here are the many looks of Angela Simmons, both past and present.

Attending a party, Angela wears a dress by Virgos Lounge. The Cyan blue beading on the dress works well with the yellow, giving a soft and girly look.

In a Superwoman-inspired look, she is wearing a metal gold corset, with leather leggings and knee-high suede boots.

This is one of my favorite outfit’s on Angie. She wears a white trench coat and black knee-high boots. Her plum lip and dark shades give off a mysterious vibe, qlmost like Jada Pinkett in the matrix, just in white.

Take a look a Angela’s sexy side. She rocks a monochrome cut-out mini dress, along with an over-size black jacket.

Throughout her evolution, Angela has gone through many hair transformations. She has went from blonde, to brunette, and back to black. This fashionista has also played with different hairstyles and lengths. Here, she is spotted at the Entertainers For Education Event in NYC, with box braids pull into a high bun. She wears a Virgos Lounge Bee Jacket and Givenchy leather boots. 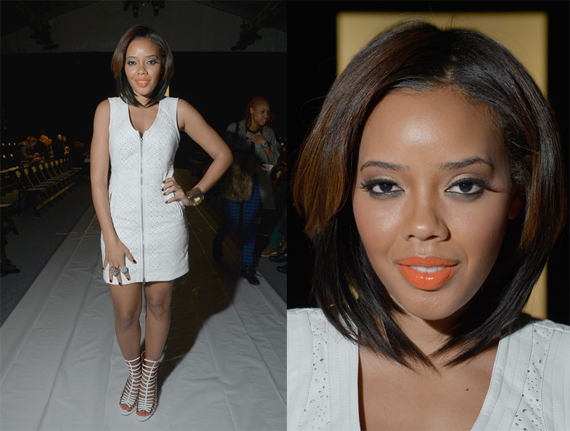 I am fan of the bob-cut on Angela, because it shapes his face well and makes her look more mature. To New York Fashion Week, she wore a white leather zip-up dress with matching gladiator minimal heels.

Currently in black hair, she wears a black jumpsuit, topped off with a studded caramel jacket and heels to match.

Angela has recently released her Angela by Angela Simmons line, giving every woman a chance to adopt her fashion sense. The line introduces classy and sophisticated looks that reflect her personal style. As Angela continues to mature, her style will continue to evolve. I’m excited to see what look she has in store for us next!

Check out more looks from Angela on her instagram, @AngelaSimmons.

Be sure to stay tuned for our next lovely lady’s Style Fashion & Hair Evolution!